Prelude is an operational floating liquefied natural gas (FLNG) facility, located offshore, north-north east of Broome, in Western Australia. Prelude FLNG is designed to extract, liquefy and store natural gas at sea, before it is transferred and shipped to customers.

The Prelude FLNG facility is 488m long and 74m wide. It has been designed to remain moored in the field for at least 25 years.

Press the marked areas to learn more about each

The Prelude FLNG facility is connected to a series of anchor chains which secure the facility to the seafloor.

There are four, 12-inch flexible risers below the Prelude facility. LNG Products are transferred to Prelude by four 12-inch flowlines.

The subsea system is made up of hardware that includes wellheads, subsea Christmas trees, production manifolds and a riser-based manifold.

Press the marked areas to learn more about each

What happens at Prelude?

LNG is made by taking water and other impurities out of the gas and cooling it to minus 165 Celsius. Condensate is also produced during the process, which is a light hydrocarbon, somewhat like diesel.

After processing, the gas is transferred onto carrier vessels and transported to customers throughout the world.

The offshore infrastructure is supported by onshore servicing. The helicopters which transfer personnel to and from Prelude are refuelled at the Djarindjin Airport, which is Aboriginal owned and employs local people.

Prelude has an onshore supply base located in Darwin, Northern Territory, which houses equipment and spare parts.

Shutdowns for maintenance are expected to be needed every four years. Underwater equipment is designed to require minimal maintenance and is inspected regularly.

Prelude’s safety zone extends in a 1.5km radius around the facility. 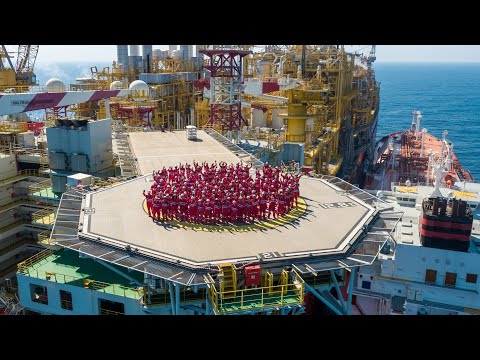 A map of the Prelude Operational area.

Proud to be Prelude.

Title: Proud to be Prelude.

Aerial shot of a worker standing on a helideck of Prelude FLNG facility. Shot of dawn rising over facility. Camera pulls in to Prelude OIM Mark Greene on the bow of the facility, Mark talks to camera.

G’day and welcome to Prelude, Shell’s first floating LNG facility right here off the coast of North Western Australia. We’re mighty proud of what we’ve achieved out here, in fact, we’re the largest floating facility ever built. So let me take you on a journey to find out what makes Prelude so special.

Images of camels walking on beach. We see sign of Broome helicopter terminal. Gimbal shot tracking a helicopter being wheeled into the hangar. Camera follows CHC helicopter pilot Martin Rock as he walks through the hangar.

And Here is where your trip begins right here in Broome. The Prelude is 550 km’s away or two and half-hours with helicopter. And I’m one of the pilots that will make your flight as smooth as possible.

Helicopter is wheeled onto runway, passengers board and helicopter takes off into the sky.

Welcome to Djarindjin Airport in Bardi Jawi country. This is where we refuel all the Helicopters before they go offshore. That means plenty of jobs for my kids and my community.

“How you doing boys?”

Images of refuellers, fishing and hunting in the waterways of One Arm Point, Cape Levique, before helicopter flies out of camera.

So we can work and live on our country.

Camera pans down to reveal image of Prelude FLNG on location.

We call this the green mile. It’s where we process and liquefy the natural gas.

We chill the gas to -162 degrees, which liquefies it, so we can send it anywhere in the world.

These modules are designed to produce over 3 and a half million tonnes of LNG each year. Enough for a city as big as Hong Kong.

And with half the emissions of coal, natural gas is also better for the environment.

Image of Andrew Court walking down the deck of the Roebuck Bay.

But all that LNG can’t go anywhere without us. Welcome to the Roebuck bay.

Image of Roebuck Bay intercut with crew working on the ISV.

We have 3 ISV’s, just like this one, to support the facility and to berth the offtake tankers. In fact, we’ve got one coming in right now.

And I have got the most important job on Prelude.

Chefs in morning meetings, intercut with shots of people eating and the Prelude kitchen cooking meals.

Specials today, we’ll have pancakes, whipped cream on side and berry compote.

They’re hungry boys and girls out here and our food here on Prelude, is best food you’ll see anywhere offshore. Prelude is just not a gas plant. It’s a floating hotel.

Man strikes golf ball in simulator, shots of people working out at gym and sunrise as people do a yoga class on the Prelude helideck.

And this may be the most remote yoga class in the world.

Now Prelude is the biggest offshore facility in the world. But it also takes a huge onshore team to make it possible.

Wide shot of supply base in Darwin.

And this is our supply base in Darwin.

From safety equipment to electrical gear, anything that goes to Prelude comes through this supply base.

Yeh mate, you can start lowering.

In fact, we’re getting ready for a load out right now.

And everything that comes off the facility goes through us.

All of Prelude’s waste is transferred to us here in Darwin, where we recycle up to 70% of everything. Our job is to look after the environment for generations to come. And we’re a 100% owned indigenous company.

Andrew with his colleagues at Rusca Environmental Solutions.

Image of Shell House in Perth.

Jo Mitchell walking to camera, in Prelude CWE. Workers in office, at computers, having meetings, and two-way conferences with Prelude offshore.

We call this the CWE. Some people call it the Starship Enterprise. 24 hours a day, 7 days a week, we support Prelude with the best technology in the world. You probably get better internet speeds out there, than you do back at home.

Meeting between Perth and offshore team.

I actually managed to get the ops guys to do a pump test yesterday.

That action is now closed.

There’s a big team working on Prelude, but these are the people that support us the most.

Stacey’s baby daughter sees her and runs to give her a big hug and kiss.

And that’s why getting home safely to our families, should always be our number one priority.

So, this is Prelude, Shell’s first floating LNG facility. What makes it so special, isn’t the technology or the size of the facility. It’s the people we’ve got working right across Australia.

Fast cut montage of Prelude workers smiling to camera. Followed by Mark Greene back on camera.

And that’s why I’m proud to be part of Prelude. Thanks for stopping over. Maybe we’ll see you out here one day.

Mark turns and walks away. We cut to a wide shot showing full scale of Prelude FLNG as Mark walks out of shot. Fade to black.

What is an Environment Plan?

An Environment Plan, or EP, outlines all the environmental impacts and risks of an activity and how these are managed to minimise risks to the environment. It is required by the National Offshore Petroleum Safety and Environmental Management Authority (NOPSEMA) for approval (acceptance), prior to starting an offshore oil and gas activity. NOPSEMA requires all EPs extending longer than five years to be revised.

Shell submitted a revised EP to update NOPSEMA with the latest information collected since activities started in 2017. Prelude began production in December 2018 and offloaded the first LNG cargo in June 2019. Since the initial Prelude EP was accepted by NOPSEMA in late 2016, Shell has gathered new learnings through the operation of the facility and developed an improved understanding of the local environment. The revised EP will assist our ongoing management of environmental impacts.

Where can I find the latest Prelude EP?

The Prelude EP was accepted by NOPSEMA in January 2021. You can find a copy of the latest Prelude EP here.

Review a description of the environment surrounding Prelude.

The Crux project forms an important part of Shell Australia’s gas portfolio, identified as the primary source of backfill gas supply to the Prelude FLNG facility.